Today we ventured out of Tokyo properly for the first time to visit Kamakura. 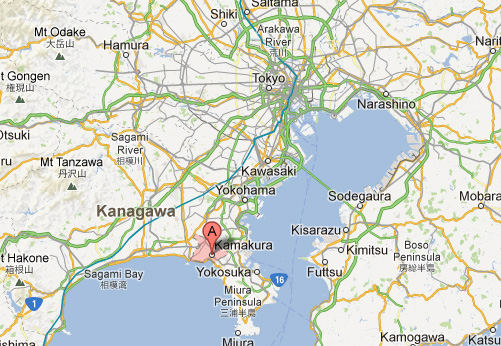 The JR line train goes directly here from Shinjuku and there’s a really handy tourist information desk within the station.  We went there, got maps of the area and popped into Delifrance for some tasty pastries to take with us. The staff were really helpful in letting us know which were the veggie ones which was handy, We learnt pretty quickly that just because it looks vegetarian and there’s no mention of meat or fish, doesn’t mean it is!

We got on the bus at stop 1, as directed.  When getting on a bus you enter at the middle, take a voucher if there is one (although we never saw any) and sit down. When you leave the bus you press the button and get of at the front, giving the driver your fare or putting it in the machine beside them. There was a screen at the front and a woman’s voice to advise you which stop was coming up and where the bus was going. The screen also told you the fare.

Kamakura is a really lovely place, it has a real small town feel. It was so peaceful despite being quite busy with tourists and school trips. The fact that it was such a lovely day probably helped a bit too!

Our first stop was the Diabutsu, or Great Buddha which resides within the grounds of Kōtoku-in temple.

This is probably one of the most peaceful places I’ve ever been in my life.

After cleansing our hands in the clear, cool water, we entered the temple to fantastic views of this 13.35m/almost 44ft tall Buddha. We were surrounded by beautiful trees and birdsong and the smell of incense. 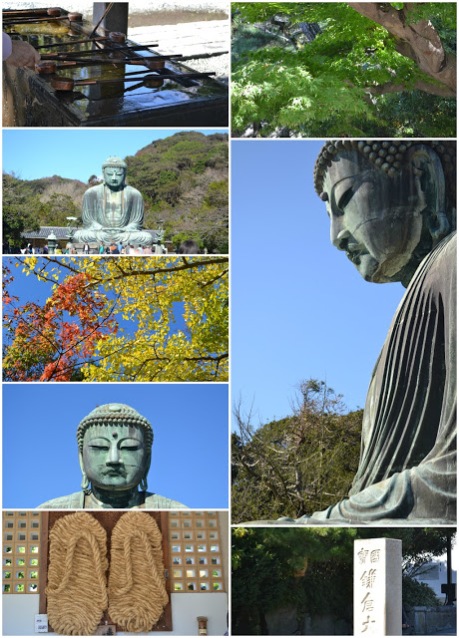 We headed to the shops and ended up at Kōsoku-ji Temple, which I wasn’t really impressed with, probably as a result of seeing the Diabutsu first, the men at work with ladders and equipment everywhere and another massive face-eating spider!

On our way to the Hase Station we found a 100yen shop! This place is great! I bought lots of Hello Kitty things, crafty things, gifts and general nonsense.

We hopped on the train back to Kamakura Station where we started our day and walked up Komachi-dori which is through the red gate. It is a street with lots of gift shops and restaurants and a couple of awesome Studio Ghibli shops!

Komachi-dori also leads up to the Tsurugaoka Hachiman-gū shrine. There are quite a few steps at this one!

I prayed properly for the first time in Japan here. We’d read up about what to do when praying, but we observed for a short time and followed what most people did.

When you enter the grounds for a shrine there’s a water trough like this one:

Using the tin cups, you ladle water onto each of your hands. We also read that you pour water into a cupped hand and rinse your mouth before spitting it out into a separate area, but we never saw anyone doing that so we weren’t going to do it! I just left my hands to dry naturally, but people did use their hankies to dry them.

When you enter the shrine you wait until there’s a space and approach the front.  Bow from the waist twice, put your hands flat together as if you are away to pray (because you are!) and clap them together twice. If there are a few of you, try to clap at the same time. We saw people doing that and it sounds nicer anyway.  Pray.  And once you’re finished you throw a coin in the collection, which is usually in front of you or just at the door. Only throw one coin, once you’re inside you’ll feel how peaceful it is and that any noise should be limited. When leaving, bow out of the door facing inwards.

All shrines also have a display outside (like the bottom picture). People who have visited to offer prayers during the services can write their prayers onto a small wooden plaque which is then added to the display.

Next: Metro-hopping to catch some big sights!