Recently I decided to treat Allan to a surprise weekend away. We were meant to visit a friend in Inverness a couple of weeks prior but were let down at the last minute (grrr!), and we both desperately needed a break away. I know that Allan loves Aviemore so that’s where I took him.

He picked me up from work on the Friday night with no idea where we were going. He kept trying to guess as I guided him in the right direction and I had to keep my poker face! But when we drove into the resort his wee face lit up!

We stayed at Highlands Hotel in the Macdonald Aviemore Resort, which I chose because it has a swimming pool, spa, cinema, restaurants, and it’s just off the main street.

It was quite late when we arrived so we took a quick walk into town for something to eat and found Super Panther, which is just an awesome name!

The place and staff are lovely, but the food was a bit mixed. Unfortunately Allan’s food wasn’t great, but mine was good. They did have some delicious looking baking though!

We headed back to the hotel with some snacks and fresh milk (that’s the first thing I do, no-one likes those little milk pots they put in hotel rooms) and the driveway was lit up all pretty!

The breakfast at the hotel was great. They had everything, cooked breakfasts, cereal, pastries, even continental stuff like cheese and cold meat, and even granola. That’s my new gauge for whether breakfast is good or not: Is there is granola and yogurt? 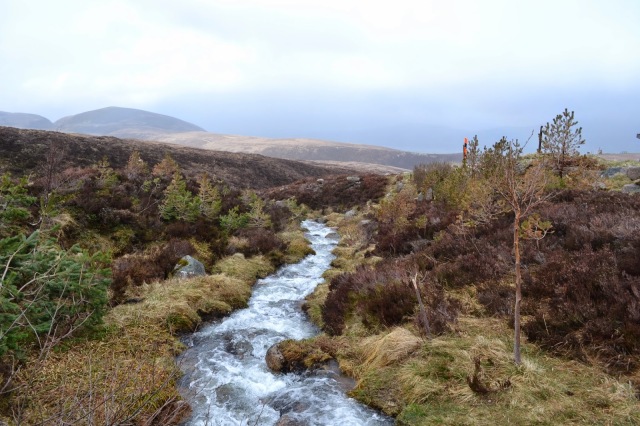 …but not very far into it the weather turned and we headed back to the car. 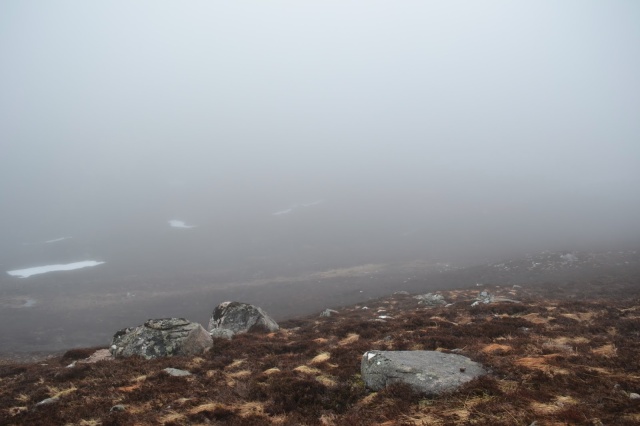 At this point it turned again and the sun was shining! The joys of walking in Scotland!

We decided to head to the Glenmore Cafe, which is also known as the Squirrel Cafe because of the feeding area they have for wildlife. We didn’t catch any squirrels, but we did see plenty of pretty birds!

It’s pretty rustic and has lots of interesting things to look at whilst you enjoy your food. 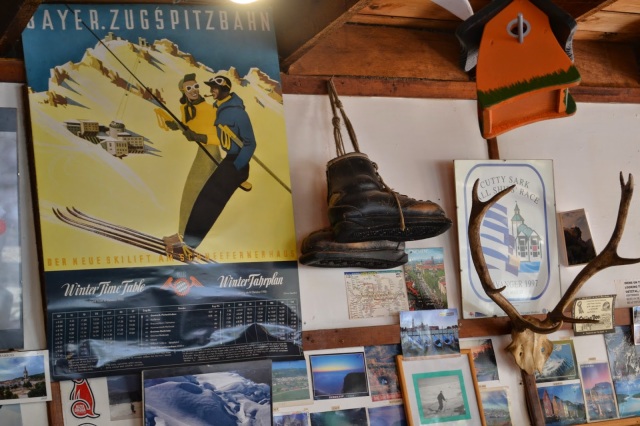 Afterwards we took a walk on the beach at Loch Morlich and it was beautiful! The sun, the beach and the loch against the snow tipped mountains = priceless! 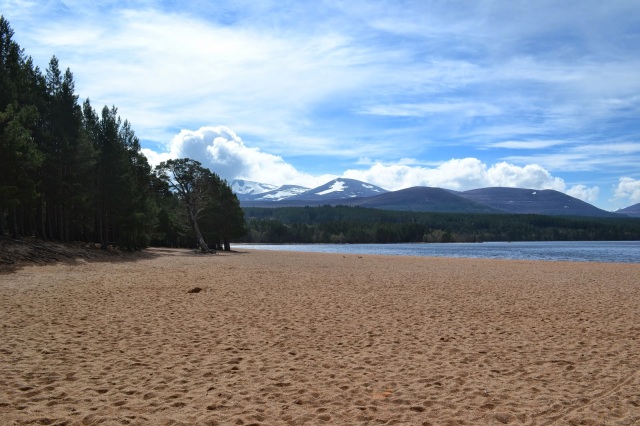 Next we headed to the Highland Wildlife Park to see all the lovely animals. Allan was trying to make friends with this camel and it came right up to the car to see him!

This hefty guy was just sat at the side of the road, watching all the cars go by.

I wonder how the guinea pigs would feel if I took this red panda home? 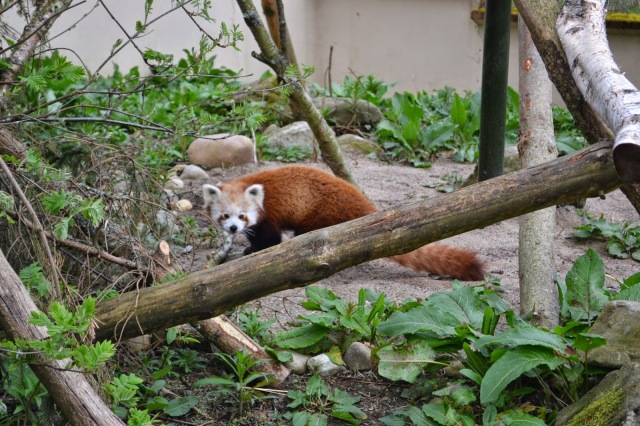 But the most spectacular of all the animals were the tigers. We saw a crowd gathering and people looking through the glass then walking away. What they didn’t see was the mummy tiger lying on a bench at the back.  We stood for a moment and then she came forward… 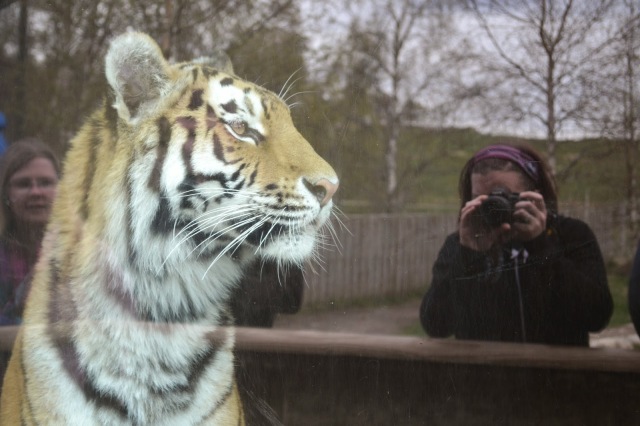 What a beauty eh? (Obviously I’m not talking about my messy hillwalking hair!)

She went away again so we moved to the window overlooking their enclosure. All of a sudden we heard the most amazing loud roars in stereo and out they came, mummy, daddy and the two kids ran out and grabbed and tussled with the meat they’d been left.

We saw lots of other animals, but it’s always hard to take good pictures from behind the glass and wire fencing. But there were wolves and wildcats and wolverines, owls, artic foxes and monkeys. You drive round half of it and walk around the rest. It was very weird seeing polar bears in a green field!

After a swim, steam room and sauna, we headed up to get ready for our evening meal. You see, this weekend was also our six-month anniversary! Don’t we scrub up well?! I have no idea why this picture has come out so dreamy looking, I haven’t even tampered with it!

We ate at Giovanni’s within the resort and it was very tasty! 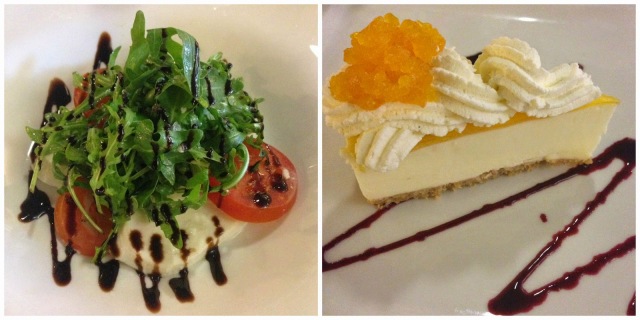 I was sooooo stuffed after a three-courser, I almost had to be rolled back to the room! But there was just enough space left for a little celebratory drink! What a lovely anniversary! 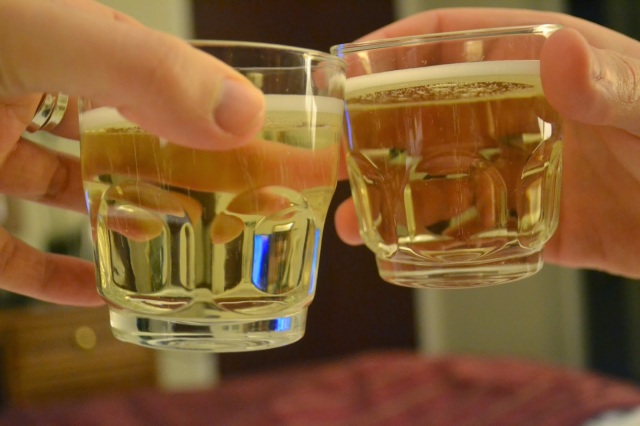 The next day we had another delicious breakfast and a dip in the pool before heading to the “Green Loch”, so called because, yes you guessed it, it’s a loch full of green water! It’s so beautiful and peaceful there.

The walk there and back was really lovely too.

On the way home we popped in to visit Allan’s friend then it was time to head home.  The closer we got the sadder I felt. I had such an amazing weekend that if we’d taken the guinea pigs I could have stayed there forever!