Being a movie fan I was quite excited when it was announced that Cineworld in Aberdeen was going to get a 4DX screen. I was even more excited when I received an invite to their preview showing last night. 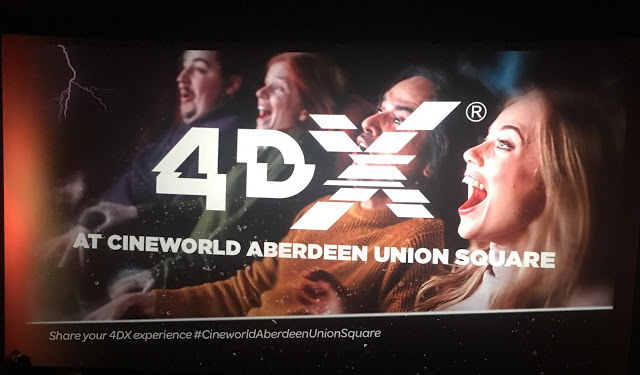 4DX is a technology that creates an immersive cinematic experience, stimulating all fives senses using motion seats and special effects including wind, rain, snow, lightning, fog, and even scents.

Unlike the motion chairs of D-Box before it, the 4DX seats are blocked together in 4s, and they move back and forth, up and down, and side to side. They also vibrate and shake and “tickle”. They’re fitted with some of the special effects such as jets of air, water, and smells while the rest come from big rigs attach to the wall or on the floor at the screen.

Our screening was revealed as Justice League but before the feature there was an advert showing what 4DX could do and the cinema went a bit wild with laughter and gasps and general excitement!

To be honest we had quite mixed feelings when we left the screening. It was fun, don’t get me wrong, but I’m not sure how often I’d view 4DX and here’s why: I found it quite distracting and often unnecessary. The timing is sometimes off so the wind’s still blowing when the characters have moved inside. I don’t particularly want to be sprayed with water when I’m watching a film (although it can be switched off on your seat) and sometimes cinema screens can be cold enough without wind blowing. The motion can be quite jerky and the “ticklers” left me wondering if my seat was broken. It also costs around £5 more than a normal cinema seat.

However, although it seems quite gimmicky, I like that cinema is progressing and that this is the next step in enhancing the experience, and I think that they’ll refine it over time.

I’d advise you to try 4DX, even just once, to experience it but choose your film wisely (a big action adventure or disaster movie would be good) and I’d choose a 3D viewing (ours was 2D) for a more immersive experience. Hey, you might really like it, fellow Aberdeen blogger Anastasia is raving about it!

Cineworld invited us along for a complementary preview evening. All views are my own.